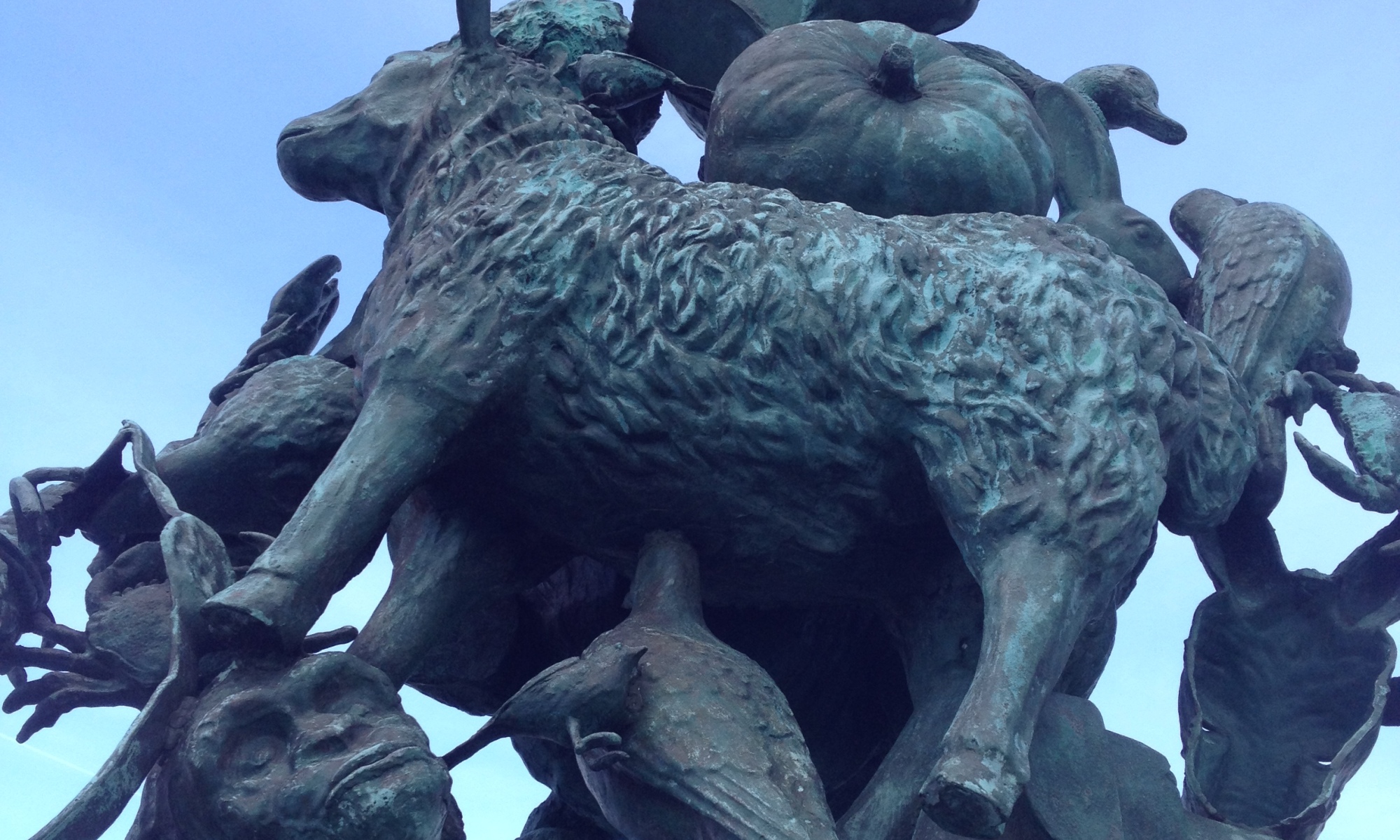 In the past weeks I have been visiting wool fairs in The Netherlands. The most interesting so far has been ‘Dag van de Wol’, hosted by the de Vereniging van Speciale Schapenrassen, (the Association of Specialized Sheep breeds) or VSS. The VSS has registered 50 small breeds, including a large number of very rare and small populations. It is through the VSS breeding knowledge for the preservation of a diversity of sheep breeds is collected, including lists of breeders:

‘Each breed has its own contact person who does a lot of work in the form of knowledge transfer, searching new bloodlines, keeping in touch with the record books including the country of origin, etc.’ –http://www.dagvandewol.nl/info.html

With such a living archive being made, it was great to see the variety of sheep scattered throughout the Netherlands: Solognote, Cambridge, Castlemilk Moorit, Herdwick, Shetland, Wiltshire Horn, Ryeland, Walliser Schwarznase, Coburg Fuchs, Scottish Blackface, Portland, Leicester Longwool and Devon & Cornwall.

On the way to the festival, the landscape was telling. Flat of course, and farmland. I knew I was in sheep country by a sculpture in a turnabout, where the farmer’s life seemed to be the theme. Although it has a main figure of a male farmer standing strong as a central figure, the rest of the concoction consisted of a diversity of creatures, vegetables and slop buckets. In the center is a sheep. 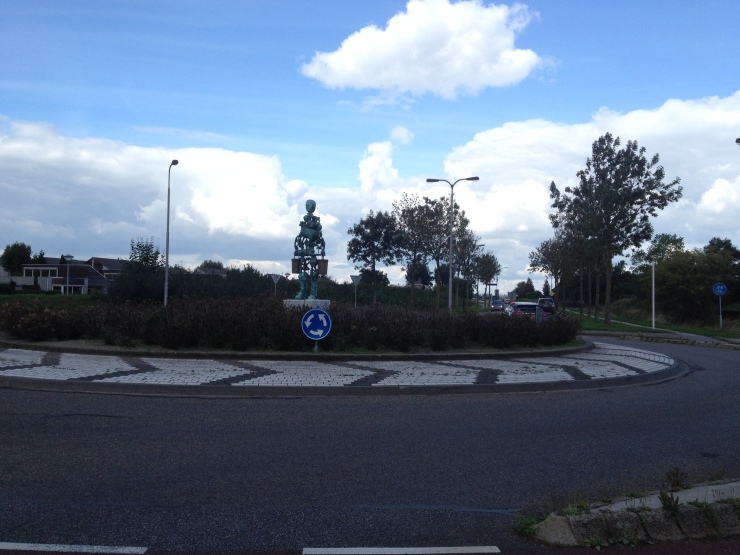 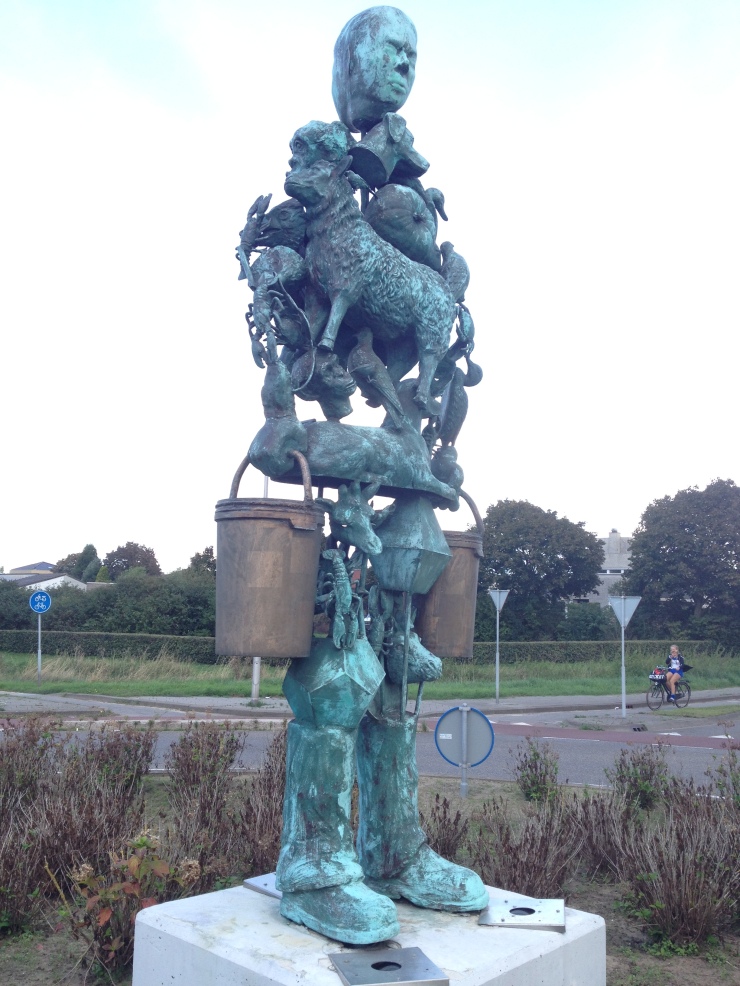 What is typical of public art, no signage was present about the artist or the work. Always a disappointment! 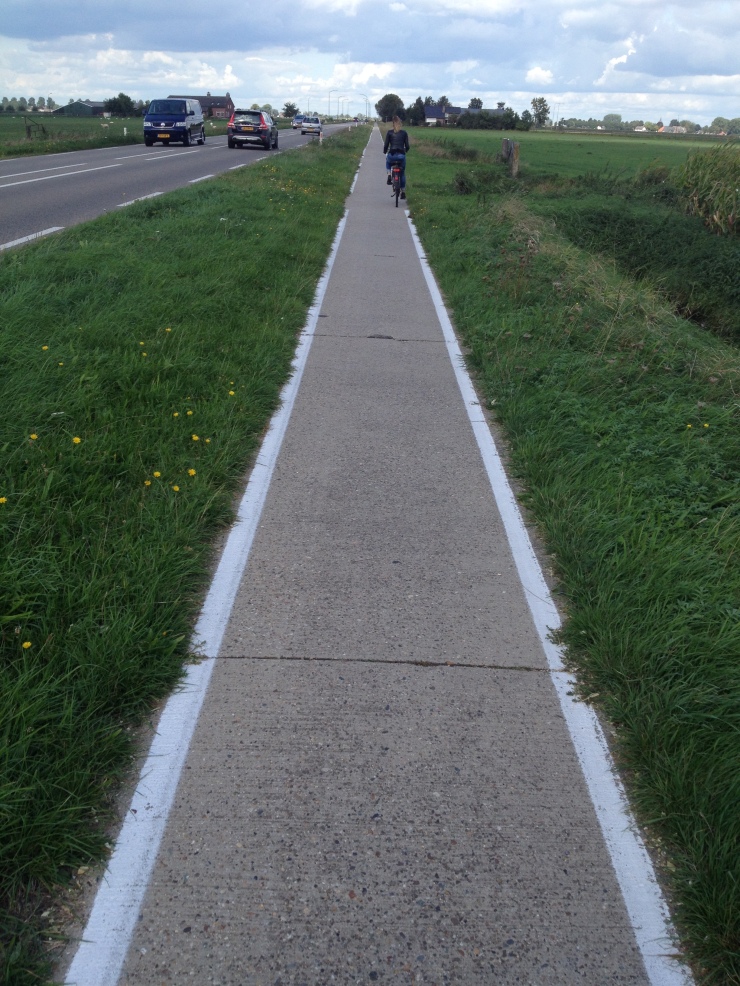 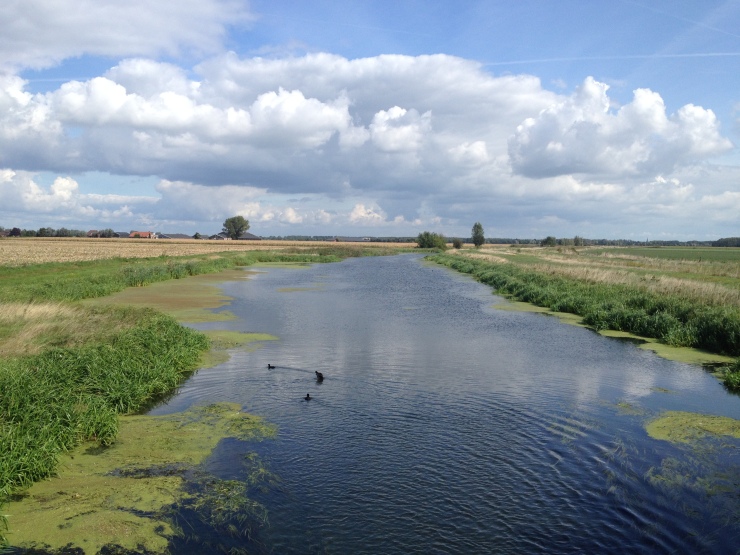 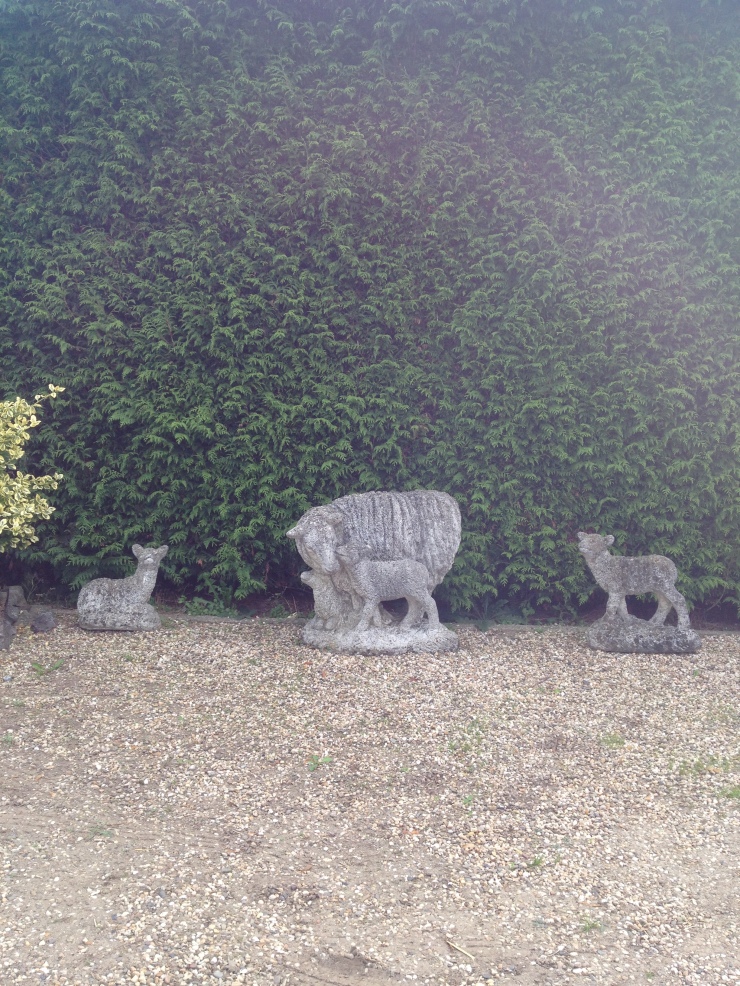 The fields went on for eternity, and I was out there, in the wind and air feeling blessed that this research leads one into magnificent landscapes. Lucky me.

Although I was biking through open landscapes, I knew I was in intensified farm land by the large barns for cows, and signs promoting robotics. The two go together, and Dutch farms are getting larger by the minute as quota levels for milk went up a couple of years ago. There was some talk in the Dutch government about trying to contain the growth of mega farms, making farmers grow their own feed. 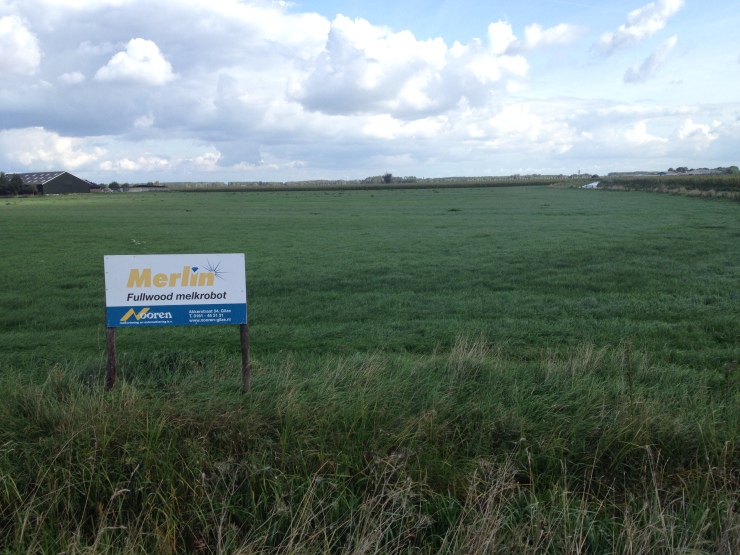 The festival was held in a working barn, unlike the romantic version I saw earlier in the Wolfest at Balloo. No flute players, no interior decorating set ups. I prefer the honesty of this festival, keeping wool grounded in reality, and away from a fairytale version.As I have heard on many occasions, the romantized version of the shepherd and his flock has to be stopped, to help in making the plight of the shepherd and smaller breeders relevant to environmental discourses of the here and now. 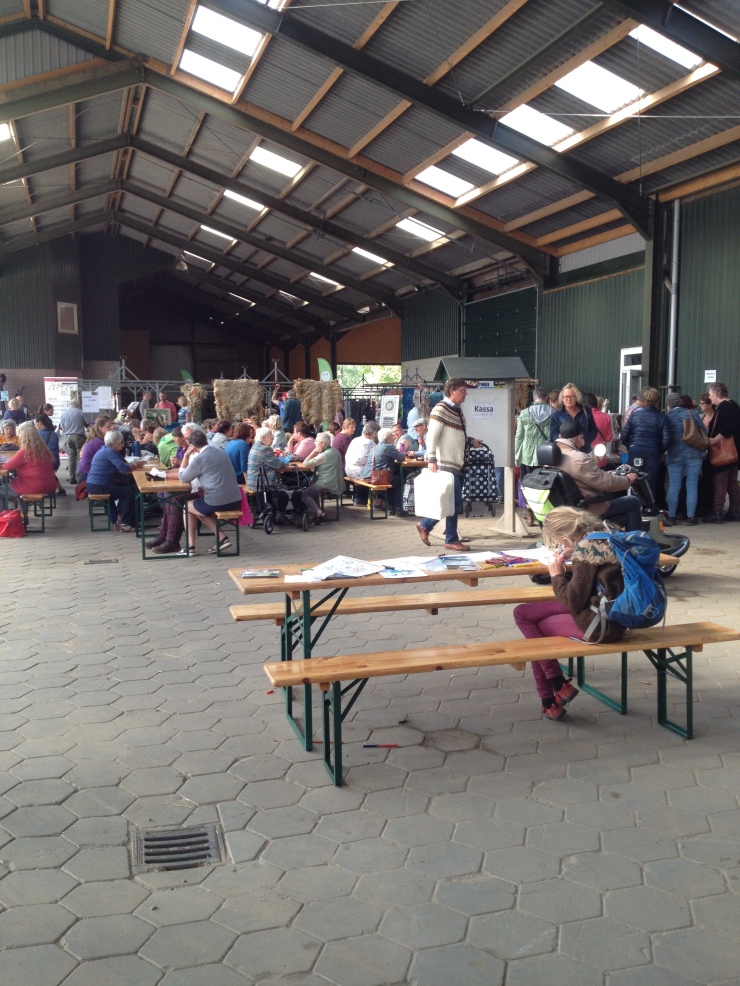 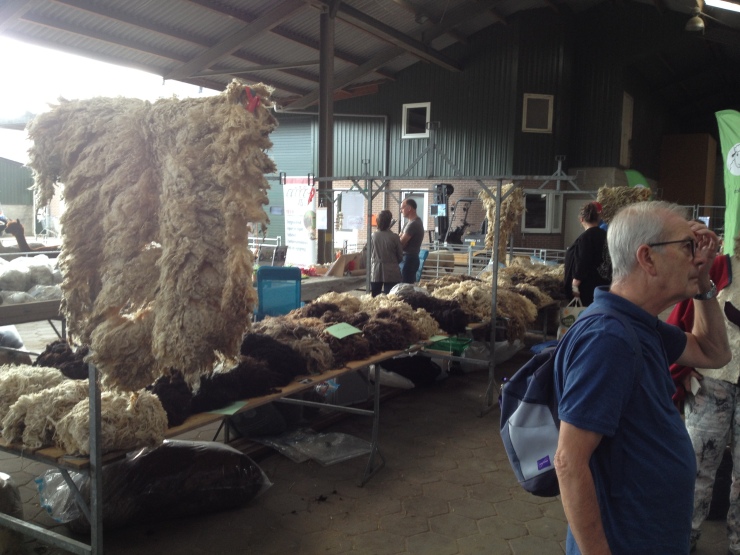 When I finally found the wool festival tucked somewhere in a cluster of many farm buildings, and via a routing system of A4 printed signs one could hardly see (again, I prefer this!), I made it into a busy space of workshops, stands and sheep. I felt I was in a place where I could find out the status of the dutch wool industry, as participants and visitor seemed to be in one way or another associated with wool. This was not a huge public fair as the Balloo festival. I suppose the numbers of public visitors to Balloo would be desired by the organizers here, but I as a researcher felt this was an environment where the issues of the wool trade could be resourced much easier.  And it was very quickly, that I found a stand which supported my thoughts. 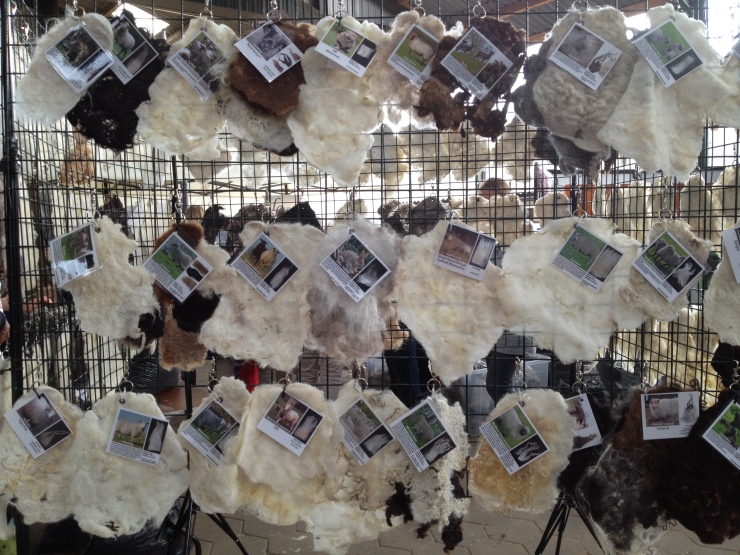 The stand called ‘wol-o-theek’ was a tactile inventory of approximately 160 sheep breeds from all over the world. Done with incredible care, someone had researched and collected wool samples, resulting in a celebration wool diversity, and stands in great contrast to the couple of sheep breeds you see in the dutch landscape. 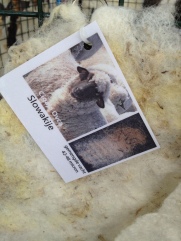 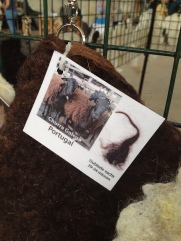 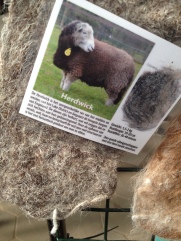 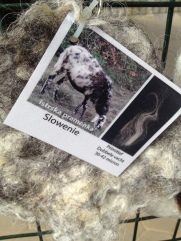 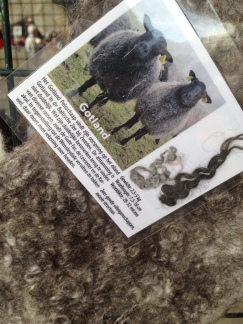 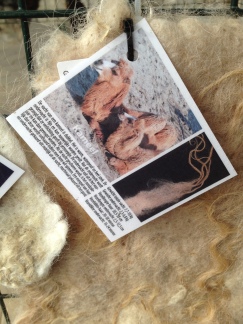 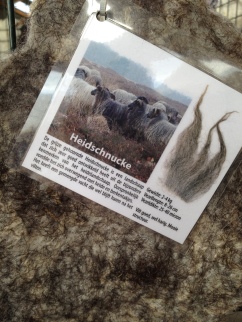 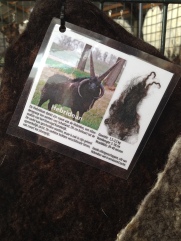 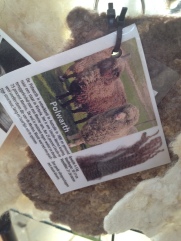 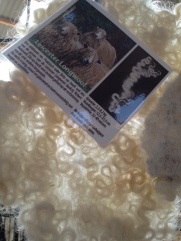 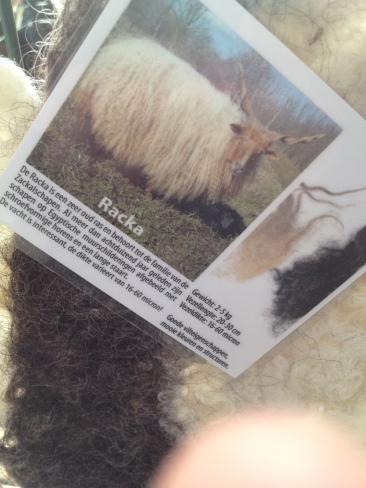 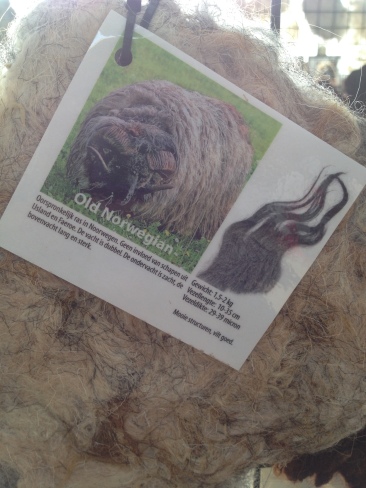 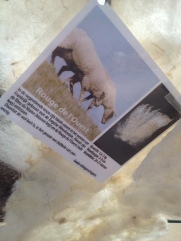 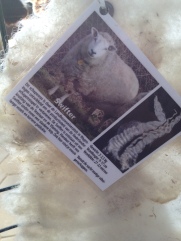 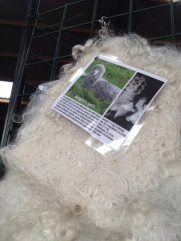 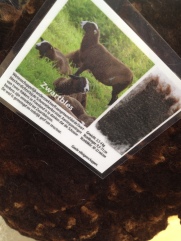 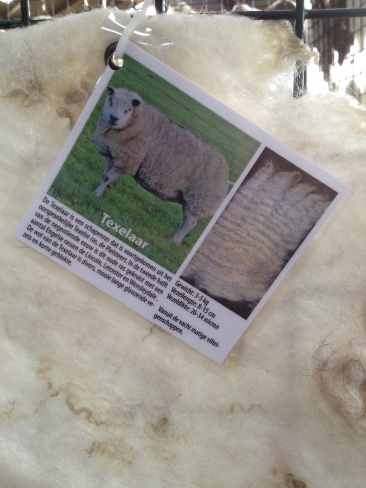 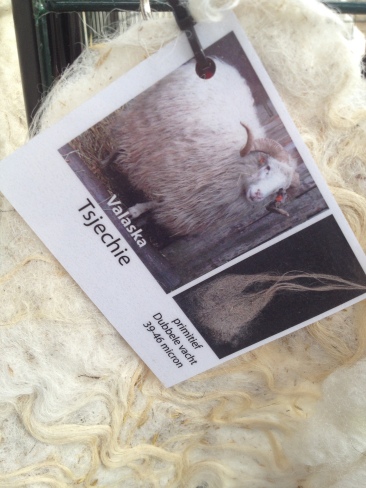 Greatly impressed with this physical inventory, I met the person behind the stand and organizer of the event, Betty Stikkers, an impassioned wool supporter, and key figure in the promotion and professionalization of Dutch wool in The Netherlands. She is also the organizer of the event, one of the founders of WOOLS NU, an important website transferring wool information and knowledge, and author of  the book ‘Ken je Wol’ and ‘Wol in Nederland’.  Both books are like manuals for wool enthusiasts, shearers, and breeders. ‘Ken Je Wol’ is full of information on the origins of breeds, the influence of breeding practices in various countries on sheep breeds, types of feed, wool fibre information such as the Bradford Count, (the micron report defining how fine a wool is), and its ‘crimp’, or elasticity. What is also fascinating, are photographs of wool samples which show copper deficiency. ‘Wol in Nederland’ is the only book of its kind which has information for spinning, felting, dying and other specifications of over 76 sheep breeds in The Netherlands. The book also shows samples of breeds and their wool, and its characteristics for felting or spinning. Samples from this book were on display at the festival in the ‘Wol – o – theek’ or wool library.

I talked with Betty, and she is also working on another book about Wools of the World. Incredible! Although our talk was short,  I could already see she is an incredible resource for wool and breeders in The Netherlands.

‘A good farmer knows his wool’, Stikkers proclaimed, and if this is the case, she and her fellow colleagues are helping to reinstate the small herder and shepherd community.

I mentioned my aim to bring shepherds together from various nations to walk the Dutch landscape, and graciously, she may be able to help find contacts.

Betty also is a talking historical archivist of Dutch sheep farms. She described a time when sheep manure was considered gold, and was used as manure on the fields, creating a circular system of agriculture. In fact, the design of Limburg farms reflects the importance of manure, with buildings facing onto a open courtyard where manure was both protected and on full display.

Also present at the festival was Wols of Holland, an organization run by Saskia and Peter Duives-Cahuzak. From the website http://www.woolsofholland.com:

‘Wools of Holland collects the wool from sheep kept in the Netherlands, with the aim to add value by asking a fair price, and communicating the beauty of Dutch wool, benefiting farmers and herdsmen. This allows these farmers and shepherds to pay more attention to quality improvement. And wool, as a sustainable raw material with minimal footprint, can make a positive contribution to the textile industry, such as that of fashion and interior design.’

The organization aims to restore the production chain of wool, making processes transparent, using a system of tracing with QR codes so that wool can be traced back to its breeder and processor. As I learned from Saskia, Wools of Holland promotes fair payment for wool, processing and production, so that everyone in the chain (from shepherd, farmer, designer, producer and end user) are part of a sustainable process. ‘Super washing’ is not allowed with their wool, which is a chemical wash often used for large amounts of wool. Washing companies which recycle their washing water are also associated with the organization.

I was also happy to meet a couple of dutch shepherds at the festival, from whom I learned their trials of bare survival. What was described seemed like a typical story. Because of a monopoly of two contractors based in Limburg and Friesland, who control 100 herds of Holland, being a smaller breeder and shepherd is consistently undermined. These contractors have a lot of power, and control the way to farm, the type of sheep, and transport (via truck) for efficiency sake, and more shepherds and breeders are stepping out of the profession. Meat is valued over wool, giving breeders only 10 cents a kilo for their wool. Shearers are also effected. For example, Polish shearers are contracted, because they charge half the price, (2,50 euros a sheep) and they keep the wool. Not to have to deal with an under valued material, having someone else deal with it seems the choice of many sheep farmers. In addition, the traditional ways of walking sheep around the landscape is being lost, considered impractical by the contractors.

In terms of shepherds and transhumance in The Netherlands, I also heard that shepherds are allowed to walk through but not graze in many places.

To hear more, I am going to visit one of the contractors in Friesland, and a shepherd with her ‘sheep grazing’ herd next week. Full report to follow. 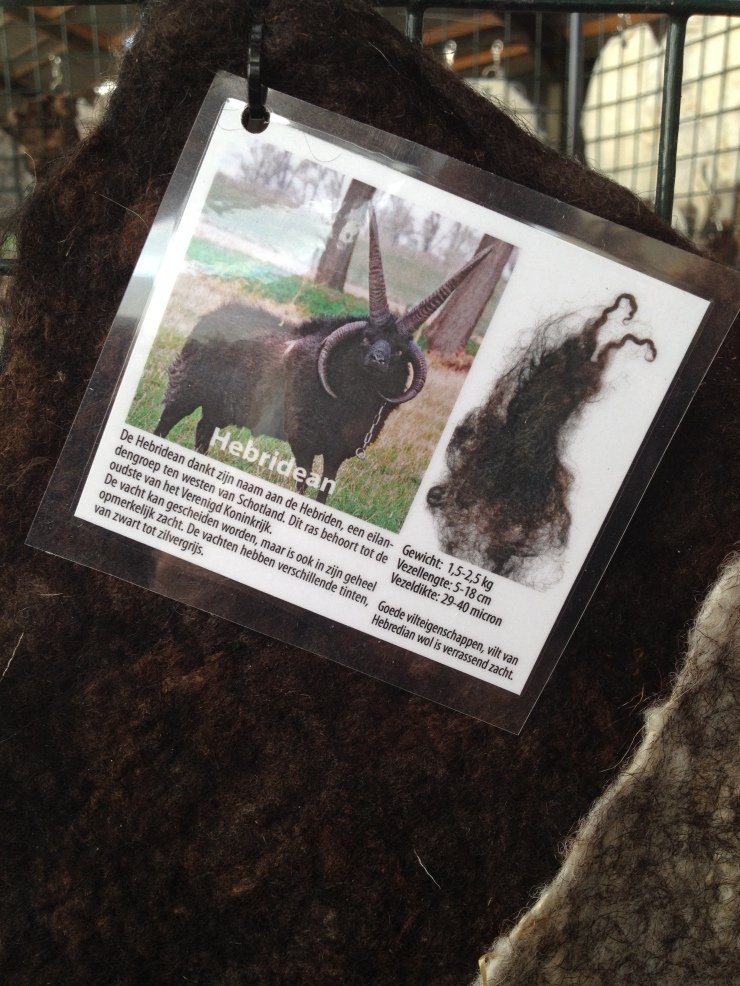